Ram In The Thicket

Sir Leonard Woolley dubbed this statuette the “ram caught in a thicket” as an allusion to the biblical story of Abraham sacrificing a ram. It actually depicts a markhor goat eating the leaves of a tree. One of two such objects excavated from The Great Death Pit at Ur, the other is housed at the British Museum. Little of the original Ram survived when Woolley excavated it, which he did by pouring wax on it and using waxed muslin strips to stabilize it. In Woolley’s original reconstruction of the Ram, he miscalculated the height of the animal and placed the tree too deeply into the base, causing the Ram’s legs to dangle above the tree’s branches.

The Ram underwent some additional conservation around 1944. Although no records exist, comparing the photos of Woolley’s original reconstruction with later ones reveals several differences; most notably that some of the ram’s fleece had been removed. When the Ram was slated to travel as part of the “Treasures of the Royal Tombs of Ur” exhibition in the late 1990s, it underwent further conservation to strengthen it for travel and to match it more closely with the proportions seen in its excavation photo. The conservation in 1997 managed to lower the Ram’s legs to the tree branches and replicate what was visible in the excavation photo.

This object is on display 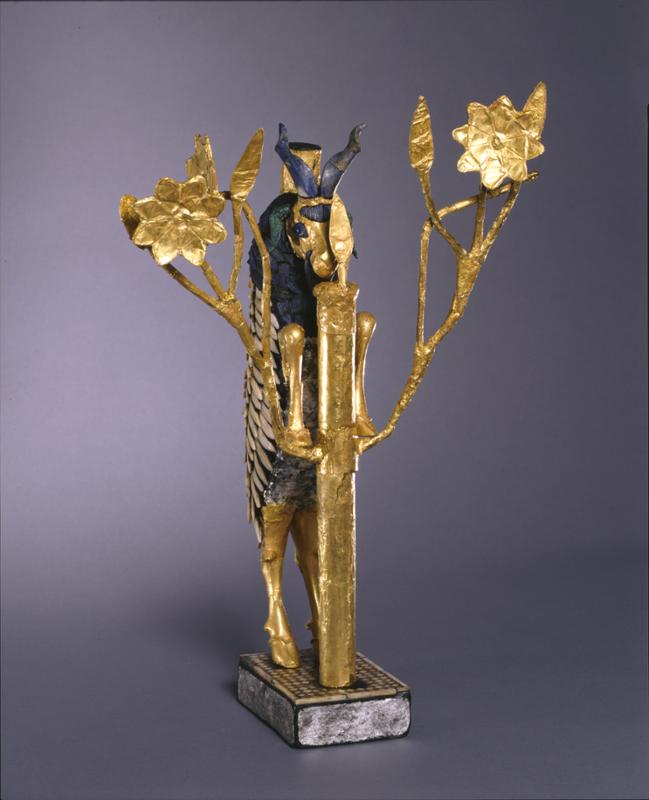 I have found the greatest death-pit of all yet discovered... Inform Philadelphia.

The Royal Tombs of Ur

In the 1920s, the Royal Cemetery of Ur excavations became one of the great technical achievements of Middle Eastern archaeology and now represents one of the most spectacular discoveries in ancient Mesopotamia (modern-day Iraq). Deep within the site lay the tombs of the mid-3rd millennium BCE kings and queens of the city of Ur, famed in the Bible as the home of Biblical patriarch, Abraham. The tombs date to the period known as the Early Dynastic IIIA period (2600-2500 BCE), a high point in the history of Sumerian culture.

The renowned excavator of the cemetery was British archaeologist C. Leonard Woolley, later Sir Leonard Woolley. In all, Woolley uncovered some 1,800 burials. He classified 16 as royal based on their distinctive form, their wealth, and the fact that they contained the burials of household servants, male and female, along with clearly high-ranking personages.

Abraham looked up and there in a thicket he saw a ram caught by its horns. He went over and took the ram and sacrificed it as a burnt offering instead of his son.

Ancient Sumer and Ur

Ur was one of the world’s first true cities, at the heart of Ancient Sumer. It was inhabited for five thousand years, from the late Ubaid period (5500 BCE) to the time of the Achaemenid Persian kings (300 BCE). Ur featured prominently in political, religious, and economic activity on the Mesopotamian floodplain. Southern Mesopotamia has long been recognized as the “cradle of civilization.” The traditional site of the Garden of Eden (Genesis 2:10-15) and homeland of the world’s earliest civilization, the southern floodplain lies between the Arabian Desert plateau on the south and the Zagros mountains on the east. Ur’s location on the banks of the powerful Euphrates River provided water and linked it to Mesopotamia’s global economy: goods found in burials at Ur—lapis lazuli, carnelian, agate, gold, silver, and copper—were all imported into a region with few natural resources.

Following its prehistoric origins in the 6th millennium BCE, Ur’s history is outlined in the Sumerian King List, a document compiled in the late 3rd millennium BCE. According to the King List, southern Mesopotamia was divided into 20 to 30 competing city-states. Ur was among the most important of these, establishing a dynasty that dominated other city-states during three periods. The First Dynasty of Ur ruled during the mid-3rd millennium BCE, ruled by the immediate successors of the kings and queens whose tombs Woolley discovered in the Royal Cemetery: kings Mesannepada, Aannepada, Meskiagunna, Elulu, and Balulu. Little is known about the Second Dynasty of Ur. The Third Dynasty of Ur, at the end of the 3rd millennium, unified the cities of the southern floodplain. The reigns of its kings—Urnamma, Shulgi, Amar-Suen, Shu-Suen, and Ibbi-Suen—are well-documented in economic and literary texts. Urnamma and Shulgi, in particular, created a highly centralized bureaucratic state through their building activities, military exploits, and political achievements.

Ram in the Thicket Through Time

Notice the position of the ram's front legs in the pre and post 1998 pictures. 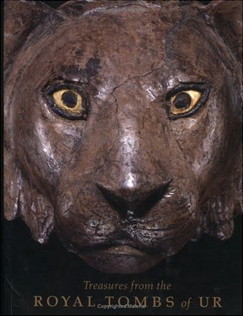 Treasures from the Royal Tombs of Ur

This stunning catalogue includes color photographs of more than 230 objects, excavated in the 1930s by renowned British archaeologist Sir Leonard Woolley, from the third-millennium-B.C. Sumerian city of Ur. Learn the fascinating story of the excavation and preservation of these magnificent artifacts.